On the way through Europe for you…

TIRLOG Transport GmbH is a young company, founded in 2007 by Robert and Michael Wohleb. The story began at our former company location in Kufstein, Austria.

Just the two of them at the outset, Robert and Michael Wohleb began with the “simple” freight brokerage. In 2008, they laid the foundation for their own fleet with their first trucks. The company grew steadily at a fast pace and, at the end of 2013, we decided to relocate to Kirchbichl, in the Austrian Tryrol, where the business has been since 2014.

With the necessary know-how, TIRLOG managed to expand its service offering to incorporate long-load and wide-load transport. To accommodate our customers’ needs, the fleet ranges from the conventional tautliner, telescopic semitrailer with extension options from 4 to 6 metres, to the tautliner mega-trailer that can be widened by up to 3 metres.

In Kirchbichl, a washing station, a workshop and its own petrol station complete the company’s main site.

In 2020, we added another location in Güssing (Burgenland, Austria). Steady continuous growth forms the basis for our success.

Traditional values in a modern company

As we are a family business, personal contact with our customers as well as our forwarding agents is of great importance to us. This family feeling starts already within our four walls, where we favour frank conversations and respond to our employees’ suggestions.

We process your transport orders with the greatest care and the highest quality standards for ourselves.

Care of our customers from inquiry to transport.

Our main concern is to offer our customers a complete service. From collecting the goods to notifying the recipient – nothing is too much trouble for us.

The right product at the right time in the right place is but our starting point. As you might imagine, our day-to-day business usually unfolds among permits, provision of freight documents, neutral loads, and much more.

Our staff shall gladly assist you at any time should you have any questions or concerns.

As a family company, we guarantee that your transport will run smoothly with our name.

Your goods are in safe hands with us 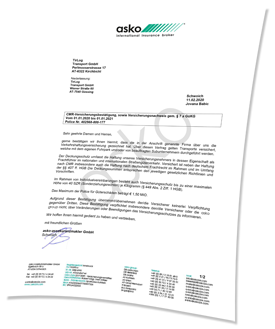 Certain documents are necessary for every project.

Download all documents here for a hassle-free transportation process.

From EU licences to CMR confirmations.